The easiest way to do music theory is one step at a time. Below is a video with a whole bunch of "gobble-di-gook" that will look and sound like it makes no sense. It is only two and a half minutes long. It is foreshadowing everything you need to know to be high a functioning and expressive musician. Of course the road never ends and this portion is only the beginning. If you have a natural ability and predisposition for musical expression and creativity then you may think this is just a subject of interest. If you are like me and don't have much of a musical bone in your body then this pathway will almost certainly help you. I have been fortunate enough to have played music with some truly awesome players. Some with gold records, some with perfect pitch, some with no big accolades but that I consider worthy of considering the word genius when I describe them. Sometimes I even get asked back! ;-))

One of the things I remind my friends who are gifted with perfect pitch is that "I can't hear, I can't count and I can't remember".

I remind them before a gig that I get along in the aural world in the same way perhaps that a well trained blind person gets along in the visual world. I use a cane, a dog, embossed items to feel and so forth.

I use music theory. I have to. You may not need to as much as me or at all even. I have to say though that even my most gifted students many of whom have gone on to achieve wonderful things, do make use of the understanding of music theory. I think at the end of the day every one has to have some grip on the theoretical if nothing else to communicate with other musicians. My perfect pitch buddies all know how to help me with very (and I mean very) few words. Communication between musicians is much of the time achieved by using the language and labelling provided by music theory. It's kind of like being able to give a few simple directions to a stranger looking for the local post office instead of having to "take them by the hand" and physically show them the way.

Watch this scary little music theory "scheme of work" video it's only 2 and a half minutes long. This is the pathway to some pretty free feelings of expression as a functioning, communicating musician. Happy Playing!

Half and Whole Steps in Music Theory

What's a Half Step?

"Half steps" which are also called "semi tones" are the shortest distance between two musical notes in the western twelve tone equal temperament system.  Mathematically speaking they are of equal spacing of frequency ratio determined by the twelfth root of two. This makes them symmetrical along a logarithmic scale. Put simply it is the distance in pitch of one piano key to the next adjacent piano key without skipping or from one fretted note on a guitar string to the next fretted position on the same guitar string without skipping.

The intervalic name of any half step is a "minor 2nd" or "augmented unison".

For now just think the closest next door neighbour of a note when disregarding the ability to "bend" or "slide" between pitches like a trombone or a human voice. 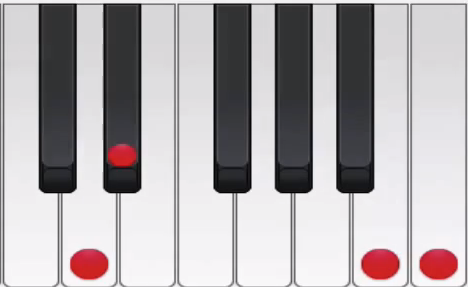 Ok... we can see (and hear) that the half step/semi tone thingy is really just the notes that are closest together in our system of western music theory. This is a very obvious visually on two of the most popular instruments used today in popular musical genres, the keyboard/piano and the fretted/guitar instruments. We find that it is really just as visually obvious to see and logically obvious to think that two half steps/semi tones will make a whole step/whole tone. All we need to do is skip over a fret (on the same string remember...) or skip over a key and we will have a whole step.

It is not so obvious visually on other instruments or sound sources such as the human voice or the trombone or a bugle. Try using your ear alone to hear the difference between

The half step, called the Minor 2nd

A little hint here is that the two notes played will either sound the same or like two different things first of all. That's the best starting point; i.e. same ? or not?

If they are not the same ask yourself, does it sound like the beginning to Happy Birthday?...or not?

Keep your score. Make it a game to improve over time. Just like a video game!

Here is a good place to remember that music theory must overlap the practical along our musical journey. The three main pillars that support musicianship (put which ever way strikes a chord for you (pardon the pun) are :

They all mean the same thing. The "Heart" part is hard to explain. The by-product of advanced understanding, articulate physical execution and high level aural perception is expressive, soulful, phrasing and dynamics, sensitive, intuitive response and reaction in interactive human musical environments, it may show through in repertoire, improvisation and a creativity of delivery in many ways. By the way there is no one thing here that is more important than the others.

What's a Natural Half Step?

If you get the idea about what half steps and whole steps are it is not a big leap to grasp the idea of the natural half steps. If you haven't already, watch the

Then we know: that the two sets of white keys the E to F and the B to C  are "natural" notes that are next to each other are as half steps. They are natural notes and they are also half steps apart so...

Both pairs are called the  "natural half steps".

What is a Major Scale?

Ok it's time for another cup of tea, a break, maybe a nap or a walk. Get some fresh air and then tinker around on your instrument whether that is a guitar or not. Have a look at the videos again. Have another cuppa or get comfy with your favourite beverage and spend twenty minutes on this guitar fretboard exercise. Just click below to go to Ricci Adams' music theory.net for brilliant free resources for music education. (Some of the graphics on this page are derived from musictheory.net resources-many thanks Mr Adams)  Try this fretboard note identification exercise to have a go at identifying the first position notes on all six strings of a standard tuning guitar. If you missed it above you could have a go at the using your ear alone exercise above.

We will pick up on the Major scale and some more of those big questions below just stay tuned and come back for :

What does Thinking in Thirds Mean?

What are the Four Types of Triad?

What is Key Signature?

What are Seventh Chords?

What is Diatonic Harmony

If you are local to the United Kingdom West Midlands Coventry Kenilworth Leamington Warwick Rugby Stoneleigh  CV8 Post Code area and are interested in tuition feel free to arrange a “First session Free” Guitar or Theory Lesson. Perhaps you just want to *chat over a cuppa about the options for your children’s music education.

*N.B. Until further notice all interaction will be virtual or in full observation of distancing practices.

click here to see how to support this site