Like we just saw with our first flat key signature, F major, enharmony is the idea that all notes can have more than one name. The most common situation arises with the piano keys that are black notes. We have just seen that it makes more sense to keep the alphabet intact. We do this by labeling the black key that sits between the notes A and B with the name B♭ (B flat) rather than calling it  A♯ (A sharp).

This way we don’t end up with a scale that has two notes with the same letter name or worse a scale that isn’t the melodic shape and sound of the Ionian major scale that we intended to construct. We worked out F major on Page One of Music Theory Sixth Floor.

Now lets add and memorise the rest of the flat key signatures that start on flat roots. 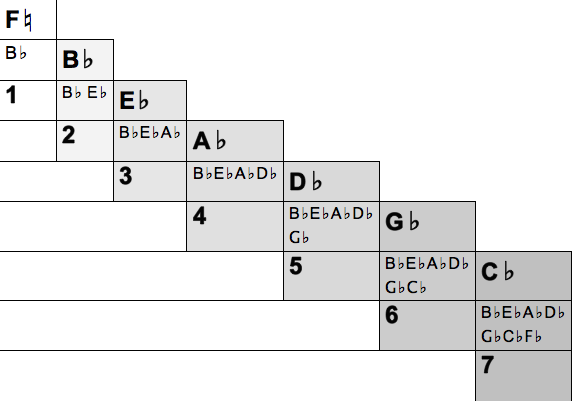 Mnemonics: How Do I Remember Flat Key Signatures?

There are two ways I use to do this. There is the “direct” way or the “from the sharps” way.

It is really easy to quickly calculate HOW MANY flats there are in each key. We just use the “convert from sharps method”.

To know WHAT the flats are in each key I use the "direct way". Either way you should learn to "think in fourths" (BEADGCF).

The Sharps to Flats Conversion Method

Here’s the trick. If you can count to seven and add any two numbers together that equal seven you are on to a winner. For example:

All you have to do now is realise that we are dealing with a seven note (heptatonic) scale. What this means to us is that the number of flats OR sharps plus the number of naturals will always add up to seven.

G major has one sharp and therefore six naturals. 1+6=7

G♭major has one natural  and therefore six flats.   1+6=7

The Direct Way: Thinking in Fourths

You have to learn to think in fourths if you really want to absorb the flat key signatures the direct way.

First: you have to memorise this phrase:

Then step two: you need to say it letter for letter the same way we did when learning to think in thirds. You go around and around until there is no beginning and no end. You want to reach a point where you can say it in time to a pulse at a reasonable tempo. You are learning to think in fourths now! If you haven’t seen it yet check out this short Chord Theory video. It's from a lecture at a college I did awhile back. It should help you to get the idea. This was about chord construction and "thinking in thirds" but it still works the same way.

Then you need to get your theory scratch pad or notebook and write it down exactly like this:

Do you see that? All we did was start underneath with the second letter in the pattern? We want them to line up in the displacement just like this:

All that matters is the order follows the same one letter displacement.

Whichever row starts with F is the row of key names, the root notes in other words.

Whichever row starts with B flat shows the flats for the keys in the row above.

Now you need to repeat this gibberish that is coming next until you are blue in the face. You need to write it until your head is just short of exploding too.

B is to BE

E is B E A-utiful

A is a BEAD

D is BEAD plus G

G is BEAD G plus C

You may be starting to see the inverse relationship about now. BEADGCF is the Fat Cats Get Dizzy mnemonic backwards!

Right then one last trick. Looking at the flat key signatures on staff paper (or just plain writing paper) makes calculating the key a gift. That's if you know what the notes on the stave (or staff) are. I will soon be covering that side of things if you don't have that knowledge yet. If you do then just look at the penultimate (last but one) flat. That second to last flat is the root of the key!

A♭is the root of the key!

Now click this link to go to a customised exercise from www.musictheory.net﻿

Notice that from the key of B flat the penultimate flat is the same letter as the root of the key. If you can count to seven, spell the word BEAD, remember GCF, start thinking in fourths (BEADGCFBEADGCF....) then there is no reason you can't absorb the flat key signature pattern. Happy Playing!  :-)

Home>Top>Back to Sixth Floor Page One